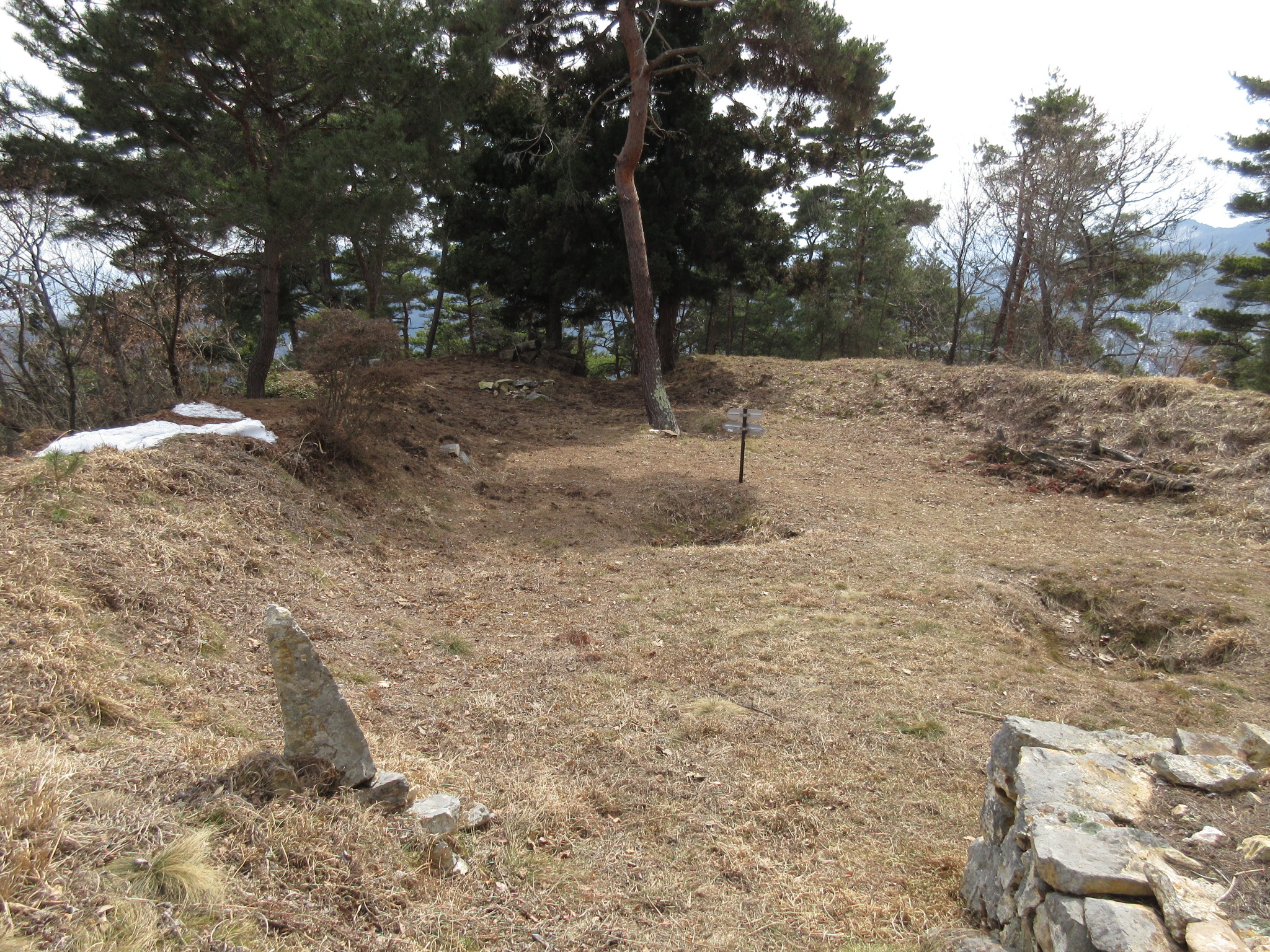 Deurajō was the main castle of the Izūra Clan (same characters, different reading), which initialy served Murakami Yoshikiyo, and was a clan integral to the Murakami's early expansion. The Izūra fled with Murakami Yoshikiyo to Echigo, and would later return and serve the Sanada Clan, at which time Izūra Morikiyo may have been castellan. It is said that Minamoto Morikiyo, the progenitor of the Murakami Clan, first lived in Shinano in a residence at the foot of this castle. After Takeda Shingen's take-over of Murakami territory, it is possible he renovated Deurajō as a castle to defend against Uesugi Kenshin. The castle continued to be used and perhaps modified even after the fall of the Takeda Clan when the Uesugi Clan re-contested the area.

Deurajō, also called Ideurajō because, I think, nobody knows the actual reading, is a fantastic Sengoku-jidai yamajiro (medieval mountaintop castle) ruin. It has some interesting features and quirky parts, and has a fair bit to explore. However, it does happen to be located on what we'll call 'Death Mountain', which is unfortunate for those attacking it - like me - but a very favourable situation from the castle's perspective. The mountain actually has several names so 'Death Mountain' can be another one, though the locals call it Jizai-san (officially it is Iwaidōsan, and people in Sarashina call it Karakasayama due to its shape, a karakasa being a traditional dome-shaped umbrella made from bamboo strips and paper or other light materials). The climb up Death Mountain is a daunting one, and the struggle begins even before one arrives as the mountain's mighty and imposing shape promises to be an absolute menace as it looms above (the mountains in this area sure are brutal; another castle mount associated with the Murakami Clan is Kokuzōsan, north of Ueda, which, because there are many mountains with that name, including north of Matsumoto in Aida, I nicknamed 'Mount Doom'). The trail... if it can be called that, begins in earnest at Jizai-jinja, Uwadaira (上平) -- yeah, I said "Uwā" when I saw those stairs because one has to climb an endless series of stone steps to reach the shrine. The monotonous climb to the shrine hall turns into an exciting and rugged trail to get up the mountain itself. The trail is busted in places and one has to sort of just pick one's way through rocks. Other sections include nothing but a steep slope with ropes hanging down from tree trunks. Coming up from the south here will mean that the bold adventurer will suddenly come across the main bailey of Deurajō.

Deurajō has a well preserved shukuruwa (main bailey) surrounded on all sides by dorui (earthen ramparts). There are a couple of well ruins in the shukuruwa. A karabori (dry moat) wraps around the shukuruwa, becoming a tatebori (climbing moat) on the eastern slope, and a terraced bailey to the south. To the north side there is another karabori and the two are separated by dorui. There is tall dorui all around these karabori too. It is such a fine complex of karabori that if one was suddenly teleported here one might for a moment think they were at one of the great medieval plains castles of Kantō. The castle ruins expand toward the west in a series of terraced baileys which stagger the mount's less severe western slope. Between the second and third bailey is another section of karabori and dorui. The castle's ôte (main path) appears to be combined with a steep, long tatebori. To the northwest of the shukuruwa and third bailey are convincing tatebori which invite one to fall into and have a bad day.

Hitherto described features constitute the main portion of the castle, but there are extra ruins below. One will have to back-track to see these but I'm glad I did. As the ridge descends it is split by three horikiri. The first struck me as being most forceful where it became a tatebori, and there was a bailey space here too. The second horikiri is deep and wide, and the largest trench at the castle. It is a double trench, having a smaller satellite trench beneath, with a berm in between them. There is a final trench after the ridge descends somewhat more toward the place where it levels out and begins climbing again to connect with other sibling mountains beyond. This last trench is solid. I also noticed that to the northwest was a large flattened area. Is this natural? Was it a place to muster troops? It wasn't on my map (by Yogo-sensei).

Retrieved from "http://jcastle.info/smw2021/index.php?title=Deura_Castle&oldid=53167"
Category:
This page was last edited on 1 June 2022, at 10:35.
Content is available under Creative Commons Attribution-NonCommercial-ShareAlike unless otherwise noted.
About Jcastle.info
Contact Jcastle.info