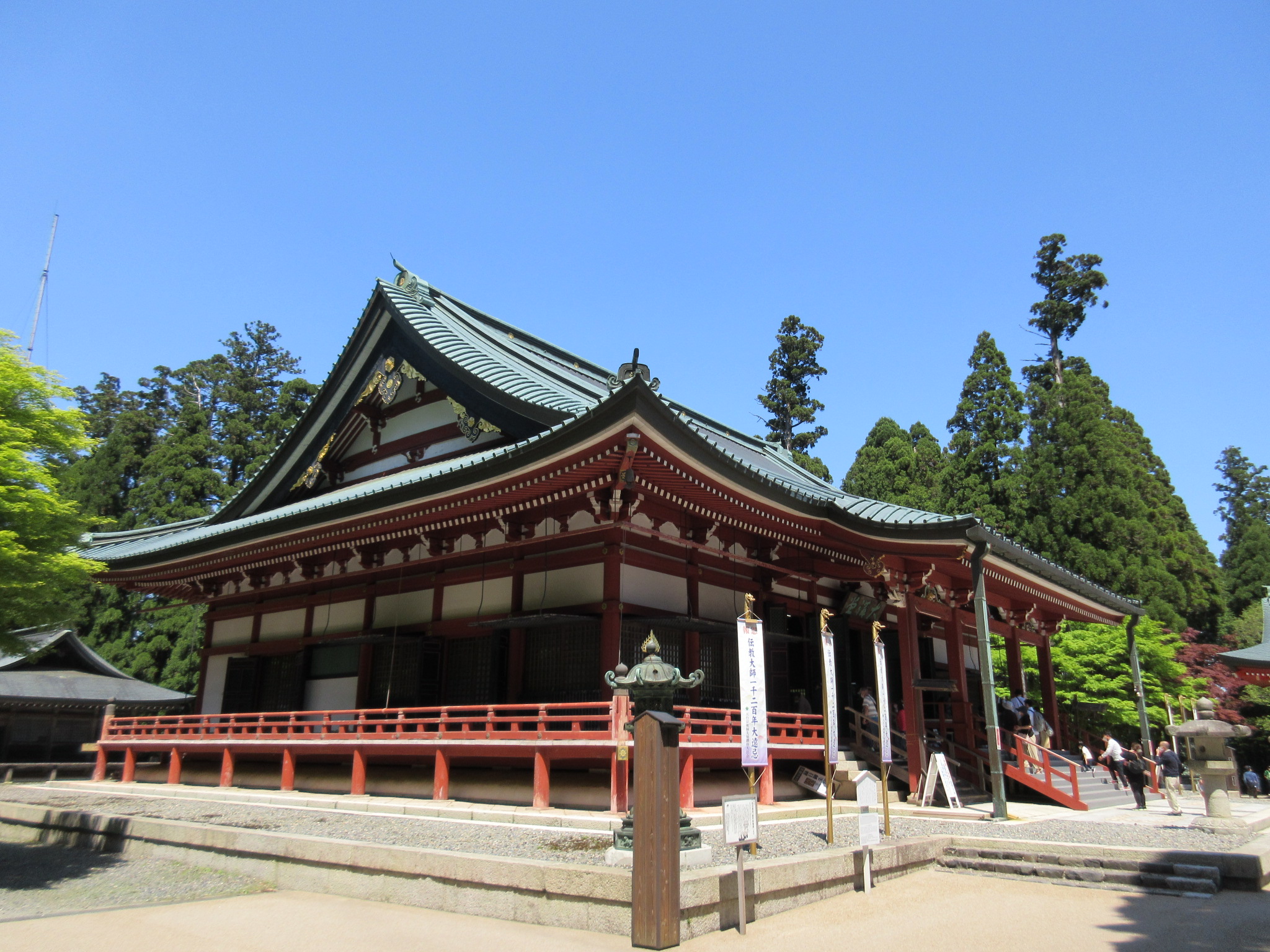 Enryakuji was founded as early as 778 by Saichō as the head of Tendai Buddhism in Japan, becoming known as Enryakuji in 823 under Head Monk Gishin soon after the founder’s death. The temple complex of three main areas, Tōtō, Saitō and Yokawa, took shape in the 10th century. Violence broke out at the temple in 993 with the Ennin and Enchin factions attacking each other, leading to buildings being destroyed. Ennin followers defeated the Enchin’s followers, destroying their monuments and banishing a thousand of their monks from the sacred mountain. The Enchin faction relocated and the conflicts continued. By the end of the medieval era Enryakuji had been attacked over fifty times and completely razed seven times. This may give one an idea as to the warlike nature of the monks of Mt Hiei. 11th century emperor Emperor Shirakawa said that the three things that most concerned him were ‘the waters of the Kamogawa (flooding), the dice of Sugoroku (gambling), and the monks on the mountain’, the latter referring to the monks of Mt Hiei. At that time the priestly soldiers of Enryakuji were called yamabōshi (mountain monks). They made known their displeasure with government policy by carrying portable shrines at Hiyoshi Shrine (formerly part of the temple). They were the rivals of the Kōfukuji monks of Nara and would often clash with them. The powerful temples fought for land rights and custodianship of branch temples, and Enryakuji even took branch temples away from Kōfukuji. In 1113 Enryakuji repelled an army of 20,000 sent by Kōfukuji.

The priests also rivalled samurai in their aspirations for power over the old courtly aristocracy. In 1336 Enryakuji came into open conflict with the samurai when Emperor Godaigo was besieged at the temple by the forces of Ashikaga Takauji. The Ashikaga shoguns often came to blows with the monks of Enryakuji, and in 1435, after attempting to subdue the temple by force, Ashikaga Yoshinori instead lured out one of its leading monks, took him into custody and beheaded him. The remaining monks set fire to the temple’s main hall in protest – with themselves inside it. The temple was then rebuilt by the Shōgun because it was a spiritually important site with a role in protecting the capital's northeast from the misfortune said to enter from that direction; the temple was now pacified. But this state of affairs didn’t last long because Ashikaga Yoshinori was killed in the Kakitsu Uprising by Akamatsu Mitsusuke. Enryakuji then regained its independence with an army of several thousand monks and soldiers. In 1443 Southern Court Loyalists holed up in the temple’s main hall and had to be dislodged by sōhei (‘warrior monks’, but in fact mostly armed laymen) and shogunate forces. In 1499 Hosokawa Masumoto attacked and burned down Enryakuji, including the main hall.

During Oda Nobunaga’s war with the Asakura and Azai, Enryakuji hid allies of those clans on Mt Hiei. Enryakuji’s four thousand priests and men-at-arms were hostile to Oda Nobunaga, and they ignored his requests to either join with him or remain neutral. The animosity of the monks had its genesis in appropriation of the temple’s territory by Nobunaga and his refusal to abide by a 1569 Imperial Court order to restore their land. This feud led to the temple’s famous destruction at the hands of Nobunaga in September of 1571. Oda forces, in total consisting of 30,000 troops, began by attacking Sakamoto, from where many people had fled into the mountains. Then the temple and its forts were attacked from all fronts. Attacking forces set fire to the forest surrounding the temple-fortress. Many sōhei gathered around the main hall but their defences were overwhelmed. Between 1,500 and 4,000 people are said to have died in the attack, and victims included both those at arms and elderly priests, as well as many non-combatants. It is said that amidst the general massacre only a single hall at the temple, the Ruridō, was left standing (the oldest structure at the temple today, however, is the Shakadō because it was relocated to the temple in later times). The temple was subsequently not restored until after Nobunaga’s demise, and at that time it did not regain its military role. The legacy of the destruction of Enryakuji by Oda Nobunaga is conflicted: did he commit sacrilege or was he delivering heavenly justice to a corrupt cult?

There are many other toride sites besides, including in the areas of the historical Hiyoshi-shinguuji, Ichijouji, and the Yokawa wing of Enryakuji. I should like to visit all of these eventually.

Retrieved from "http://jcastle.info/smw2021/index.php?title=Enryakuji&oldid=53317"
Category:
This page was last edited on 4 June 2022, at 21:30.
Content is available under Creative Commons Attribution-NonCommercial-ShareAlike unless otherwise noted.
About Jcastle.info
Contact Jcastle.info