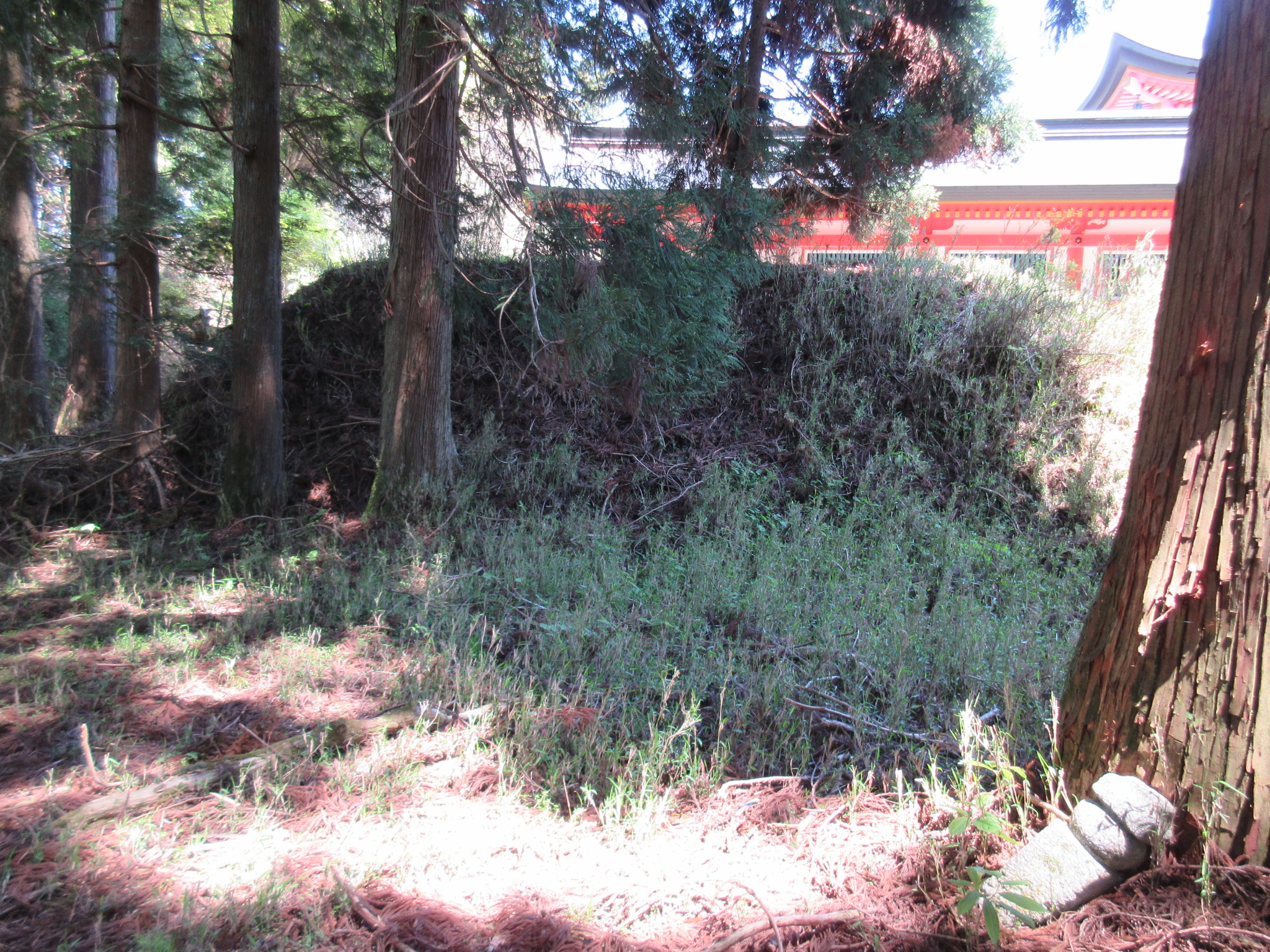 The Amidadō-toride was the first fort site I came to in the Enryakuji temple-fortress complex. This site is so called because it is centred around the temple’s hall to Amida. The ruins here chiefly consist of dorui (earthen ramparts) and terraced areas which served as baileys. The site of the temple halls, including the reconstructed East Pagoda, were presumably the main bailey. The largest dorui segment can be found to the north of the Amidadō. There is also what looks like a tatebori (climbing moat) beneath here, but it could be something else since I found no other such trenches that day. To the south is a ridge with flattened spaces which overlooks the East Pagoda, which I also inspected. If military considerations were absolute then it would not be the case that the fort should be centred on the halls as opposed to on the elevated portion of the ridge, but the original temple structures were fortified where they stood. In this way the Enryakuji forts are very different from other mountaintop fortifications – those of the samurai. Nonetheless the use of tall and thick earthen ramparts is typical of medieval earthwork fortifications, and it was gratifying to find some at Amidadō-toride.

I felt a bit of an outsider snooping around for fort ruins whilst everybody else was busy praying or admiring the temple architecture. This area of the temple was mostly rebuilt in 1937. The use of the term ‘tower’ or ‘pagoda’ refers to two of the temple’s three main areas. This can lead to confusion. The East Pagoda is the temple’s eastern wing or portion, and the West Pagoda is its western zone. The wings were named for the pagodas which originally stood in them. The ‘Japan Experience’ confidently tells us that both pagodas, referring to the buildings themselves, are long gone, but in fact the East Pagoda itself was reconstructed in 1937 (largely out of concrete). The website says that erroneously despite showing the East Pagoda in their pictures. There’s probably confusion as to what the word ‘pagoda’ means here. Whilst most associate East Asian pagodas with tall and slender towers of usually an odd number of tiers, such as at Japan’s Hōryūji or China’s Dàyàntǎ (Giant Wild Goose Pagoda), there are many forms of pagoda. Different words associated with different forms are actually just words for the same structure, defined by function, in various languages. Dagoba (not uncoincidentally the name of a certain Jedi’s famous hermitage I'm sure) is Sinhalese, Stūpa is Sanskrit, and Chorten is Tibetan; they’re all fundamentally the same in their purpose. The Kanji / Hànzì is 塔, which is ‘tō’ in Japanese and ‘tǎ’ in Mandarin. Anything ending in 塔 in Japanese then is a type of pagoda (I have acquainted myself with most of the forms). The pagoda at Enryakuji is a tahōtō (多宝塔), a type of stūpa developed in Japan, and related to the also native hōtō (宝塔). Hōtō means ‘treasure tower’ and a tahōtō is a hōtō with an additional tier (the former is more common than the latter at full size). Other pagodas are described in terms of the number of their tiers: sanjū(no)tō, gojū(no)tō and so on. The word covering all forms in Japanese is 'buttō 仏塔', meaning 'buddha tower'. At Enryakuji the East Pagoda, albeit as a modern reconstruction, stands, but the West Pagoda does not.

The Amidadō is connected to the Tōtō (East Pagoda) and other structures via a kairō (cloister, or roofed walkway), and one passes into the complex through an ornate gateway. There is also a shōrō (belfry) at the fort site. The terrain slopes from here and one descends to the site of Enryakuji’s main hall, the Konponchūdō. This is the end of the fort site. There is another fort site on the opposite side of the Konponchūdō, the Monjurō-toride (Enryakuji Monjurou Fort).

Retrieved from "http://jcastle.info/smw2021/index.php?title=Enryakuji_Amidadou_Fort&oldid=58201"
Category:
This page was last edited on 14 September 2022, at 08:24.
Content is available under Creative Commons Attribution-NonCommercial-ShareAlike unless otherwise noted.
About Jcastle.info
Contact Jcastle.info