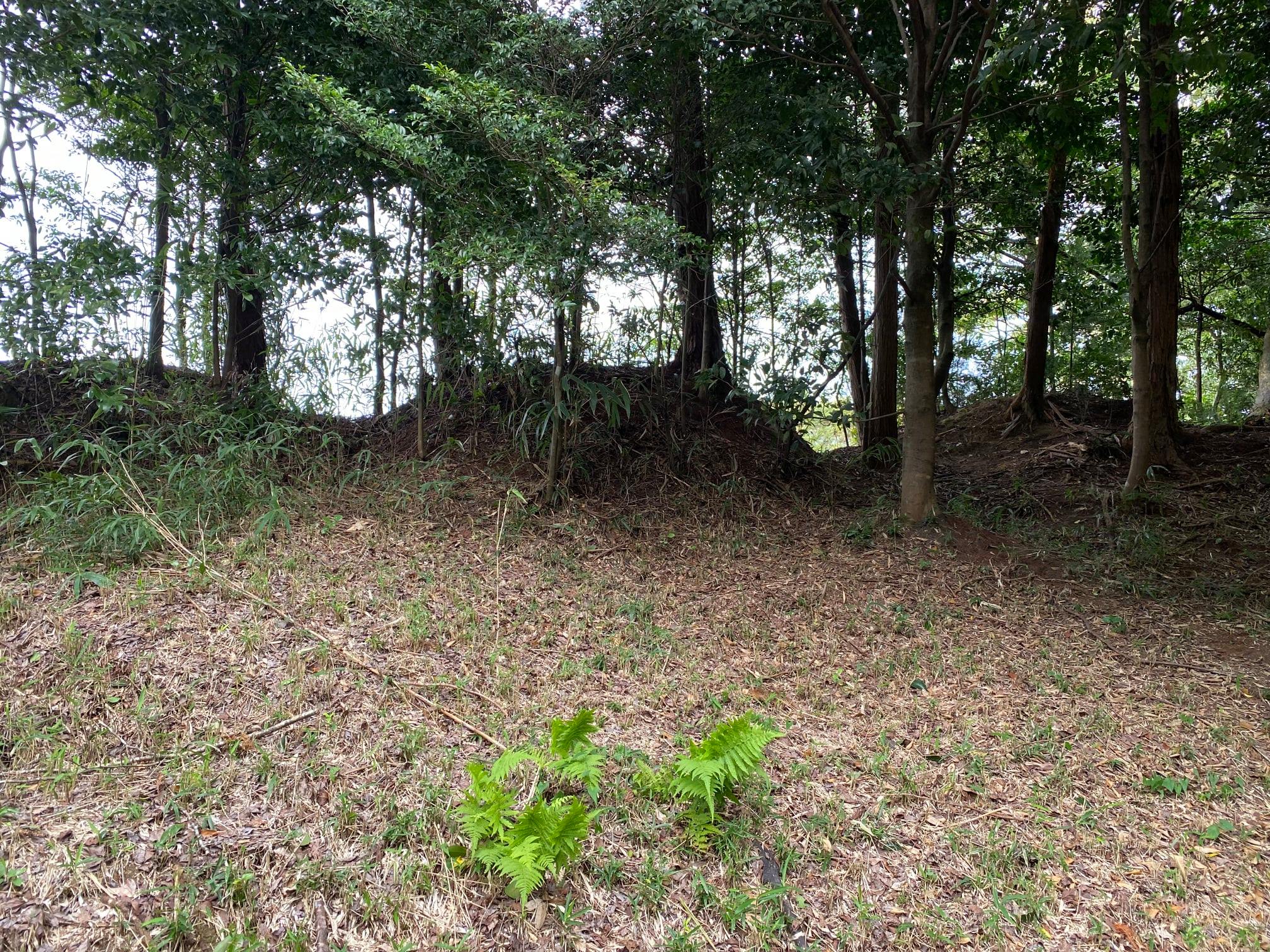 Mibuno Castle, also known as Shimizu Castle, is a Warring States period fortress believed to have been built by Shimizu Iwashiro Mamoru. It was the site of a fierce battle between the local militia and the invading Oda troops in October of 1581.

There are over 13 small castles scattered about the Kawahigashi area, with Mibuno Castle being the largest of them. Mibuno was attacked during the second Tensho Iga War by Oda Nobukatsu the second son of Oda Nobunaga. The villagers and warriors of Iga Mibunogo, Aidamura, and Midaimura are said to have gathered at Mibuno Castle, which then became the stage for the fierce Battle of Mibuno Miyagawa against the Oda forces. Mibuno fell and was captured by Oda allied Takigawa Kazumasu, and was abandoned after that.

Mibuno is a hirayamajiro (hill and plains type castle) at a relative height of 20 ⅿ located in Iga Ueno City’s Fukada, Kawahigashi region. The remains include earthworks, a large koguchi gateway, dry moats, water moat, and the possible site of a turret or noroshi smoke flare pit. The main kuruwa (compound) is a square shape of around 50 meters. To the north is a large 70 by 50 meter field, believed to have been a possible bailey. Between that and the main castle complex is an L-shaped mizubori (water moat) surrounding the north and eastern sides. The main sections’ koguchi entrance is on the lower southeastern corner.

One of the most fascinating points of interest regarding this castle are the 2-4 meter high, thick dorui earthen walls surrounding it. Most Sengoku period castles have the same earthen embankments piled up to make the protective walls, however Mibino castle’s dorui feature large gaps — almost like battlements — around the top. Exactly what these V-shaped spaces were for, remains unknown, although speculation includes “stone dropping” and teppo matchlock firing spaces.

My own thoughts are that there may have been low wooden shield-like walls along the upper, outer edge to allow firing positions for gunners and particularly archers, with their longer bows standing in the sunken sections to remain partially covered, but be forward enough so as not to be hindered by the walling. Again, this is only my speculation. On the north western corner is a slightly thicker segment of dorui. This is slightly hollowed out with a 60cm deep, 2 meter diameter dish, and it has been suggested that it may have been the noroshi-dai, or smoke flare base.

Retrieved from "http://jcastle.info/smw2021/index.php?title=Iga_Mibuno_Castle&oldid=57124"
Category:
This page was last edited on 21 August 2022, at 11:05.
Content is available under Creative Commons Attribution-NonCommercial-ShareAlike unless otherwise noted.
About Jcastle.info
Contact Jcastle.info