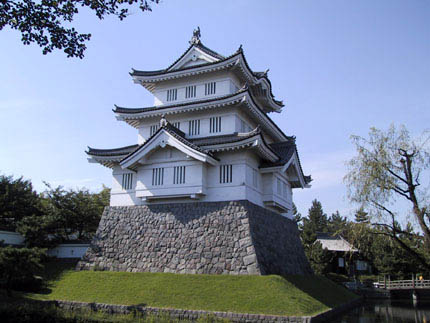 Oshi-jo was completed by Narita Akiyasu around 1479. The Narita family ruled over the area of Gyoda for about 100 years until the castle fell to forces loyal to Hideyoshi in his assault on the Kanto area. Oshi-jo was considered to be well designed in that it made use of the many marshes and swamplands in the surrounding area to its defense. These marshes proved to be valuable defenses in the initial attack by Ishida Mitsunari.

Ishida Mitsunari brought 23,000 troops to take control of Oshi-jo after having defeated Tatebayashi-jo just three days earlier. Compared to this legion of seasoned warriors, Oshi-jo had a complement of approximately 619 samurai and another 2,000 soldiers made up of local farmers and townspeople. With the help of the natural defenses provided by the area, these people amazingly held off Mitsunari's army and forced him to regroup and consider a different approach

Just as Mitsunari was defeated by the swamplands surrounding Oshi-jo and Gyoda, he devised a new plan to make use of nature himself. He put his samurai to work building walls and in 6 days they completed 28 kilometers of walls to divert the water of two local rivers into the town to flood the castle. This water assault began on July 6 and the heavy rains of the rainy season also aided in Mitsunari's efforts to flood the town. However, since the castle was built on a slightly higher elevation, it remained undamaged.

During this time, Narita Ujinaga, the master of Oshi-jo, had actually been fighting with the Hojo at Odawara while his younger brother Nagachika defended the castle. Once Odawara fell to Hideyoshi, Ujinaga sent word to Nagachika to surrender the castle. After the Tokugawa moved to Edo, Oshi-jo fell under the control of Ieyasu who placed his fourth son Tadayasu in charge.

This tenshu was actually reconstructed in the original Sannomaru.

My book said to go to the castle by bus from Gyoda station but there are only a few busses per day and I would have had to wait nearly two hours for one, so we ended up walking the 4 kilometers to the castle. If you'd like to visit Oshi-jo, there are many more busses leaving from Fukiage Station. Although I did not visit them, there are also many kofun in the area that may be of interest to history enthusiasts.

I think the location is pinned slightly off. It's is now in a park. A nice park, but the castle isn't actually there :)

The castle is a little bit to the northwest of this park. Google Maps can also find if you just type in "Oshi Castle".

I took the advice of ART and took a train on the Chichibu line (non-JR) from Kumagaya station to Gyôdashi station. It's 1 km to the site. I had printed the map from Google, but decided to follow the signposts. I recommend to do this, because you'll be leaded trough a very nice walking street going straight to the castle. The scenery is nice and the museum has some nice artifacts and a model of the castle in its heyday. Sadly you aren't allowed to take pictures. Exiting the museum i encountered a young lady who asked me if i had some time for a photoshoot with a Taishô. So i waited and during that time i told her that i own a dvd of the movie 'Nobou no shiro'. Imo this is a great movie. Not exactly historical, but funny and entertaining. In the museum you'll see a lot of posters about this movie. I visited this castle because of the movie and because it's easy to reach Hachigatajô from Gyôdashi station.

I found out one of the gates at this site is not reconstructed but is a relocated surviving gate from the old Oshi Domain School.

Thanks Furinkazan, links is updated.

The link to the castle is now:

Oshi Castle is a nice little site. The reconstructed castle tower is accessed via a modern elevated corridor which leads to the second floor from the adjacent museum building, which is novel I suppose. In addition to the keep are also a few reconstructed gates and surrounding moat. The museum had interesting exhibitions including a whole room dedicated to tabi, which the town, Gyōda, is famous for traditionally producing.

This site can also be easily reached from Gyoda City Station (different to Gyoda Station) on the Chichibu Line.

The movie is \Nobou no Shiro"(のぼうの城) a movie version of a well known work of a fiction by the same name from a couple of years ago. It was originally scheduled to be released in the autumn of 2011 but was postponed to 2012 due to sensitivities about Mitsunari's \""flood attack\"" in relation to the recent Tohoku disaster."

Went here in the afternoon at the end of a long Obon holiday road trip. Good time for photos of the moat. This castle is supposed to be featured in a movie coming out soon about the Ishida Mitsunari dorui story. The museum was closed and I didn`t like the look of the long white tunnel connecting it to the yagura but other than that the grounds were very well kept and pleasant to walk around. The dorui wasn`t very well sign-posted; the whole ground lacked sign-posting in general, but there was a nice overlay map of the orignal castle and the current township, which showed the swampy nature of the terrain nicely. The walk from the museum down to Shinobu-Ike is pleasant and goes past a few marked sites of where structures were and also the head shop of ju-man-koku manju.

no, they're unrelated. There aren't any materials around to accurately recreate the keep of Oshi Castle. Both keeps were of the gosankai watchtower type which was just a large 3 story yagura used as a main keep. These also tended to be the simpler square symmetrical sotogata type of main keep so it is natural that they would have ended up looking very similar. The 3 story Fujimi Yagura watchtower at Edo Castle is also of the same type so you can see similarities between all three and understand why it might have rebuilt it in this style:

Narita Ujinaga, an ally of the Hojo, withstood attacks from Ishida Mitsunari until July 14.

Retrieved from "http://jcastle.info/smw2021/index.php?title=Oshi_Castle&oldid=48468"
Category:
This page was last edited on 23 June 2021, at 13:03.
Content is available under Creative Commons Attribution-NonCommercial-ShareAlike unless otherwise noted.
About Jcastle.info
Contact Jcastle.info