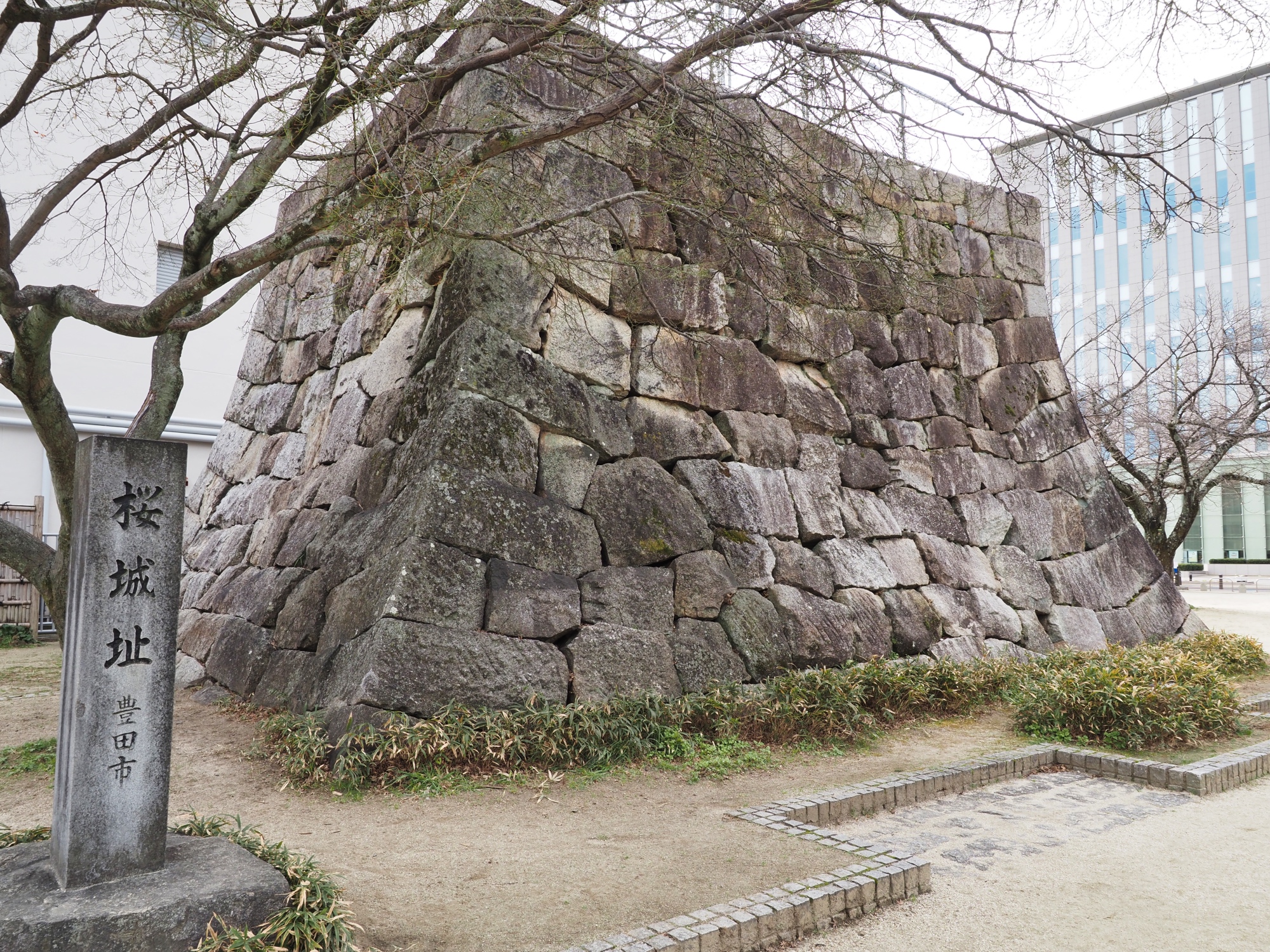 There are three castles around Toyotashi Station that are closely linked together. The first castle was Kanaya Castle, built around 1308-1310 by the Chujo clan. It had three small baileys near the present day Uwagoromo Station, but has largely been developed over and the Meitetsu Train line runs through the middle of it. Kanaya Castle was abandoned in 1600 when Miyake Yasusada built Sakura Castle to the east of present day Toyotashi Station.

Sakura Castle was also built three times. The first Sakura Castle was built by Miyake Yasusada in 1607. It had a proper castle and castle town and lasted from 1607-1664. The structure and size of this castle has been lost to history. When the Koromo Domain was abolished in 1664, the castle was destroyed, moats were filled and warehouses were built on the castle site. In 1683, Honda Tadatoshi built a jin'ya (government outpost for smaller domains without a castle) on the site of the former castle. In 1756, Naito Masamitsu became a "castle holding" level daimyo and started construction of the third Koromo Castle. After the Yahagi River flooded in 1779, Naito gave up on Sakura Castle and move to Koromo Castle on a hillside roughly in the middle between the locations of Sakura Castle and Kanaya Castle. Thus, the third castle in the series of castles around Toyotashi Staion is Koromo Castle. See that profile for more details.

The stone wall you see today was the foundation of a yagura of the Second Bailey (Ninomaru). One legend says that the castle is called Sakura (cherry blossoms in Japanese) because Miyake Yasusada planted many cherry blossom trees around the castle. The legend is unfounded and may have been just a clever story playing off different kanji for the name Sakura (桜= cherry blossoms vs. 佐久良)

Only the castle wall foundation of a yagura remains in the Sakurajoshi Park. This was once a fairly large, albeit short lived castle. You can see an illustration of what the castle was like on this page. it's the second illustration from the bottom. You can read more about the history of this castle and the other two related castles below. Unfortunately, I ran out of time to visit the Kanaya Castle site on this trip, but there is really nothing to see of the site.

Sakurajō is a strange, amusing little site. There is basically only the yaguradai (turret platform) to see. There is no stairway up the stone platform, and it seems so random that one laughs - or I did. I was quite happy with it though, and went around the strange yaguradai twice, like a dog or cat trying to orientate itself in unfamiliar territory. This apparently owes to the castle never being completed.

A column of piled stone without stairs to climb it o.0

Retrieved from "http://jcastle.info/smw2021/index.php?title=Sakura_Castle_(Aichi)&oldid=48045"
Category:
This page was last edited on 30 May 2021, at 09:15.
Content is available under Creative Commons Attribution-NonCommercial-ShareAlike unless otherwise noted.
About Jcastle.info
Contact Jcastle.info