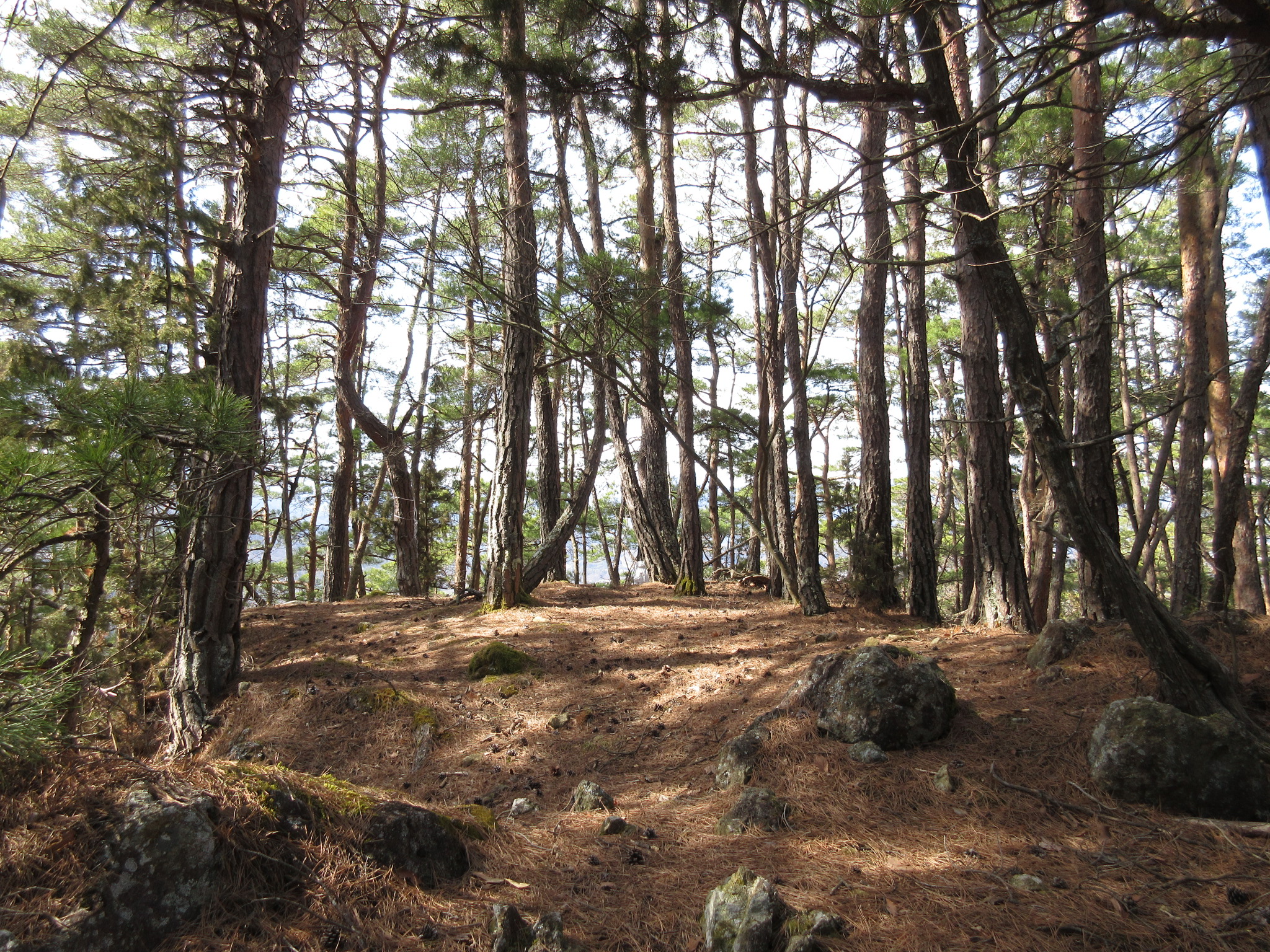 At the entrance of Shiodajō (where I had been several hours before reaching the Higashi-toride, yet by this time it felt like days) is a simplified depiction of the castle's layout showing the Lower Castle and Upper Castle separated by the toranokuchi gate complex. To the sides are small castle symbols ('凸') simply each labelled as 'Fort'. However, whilst the right side symbol, representing the Nishi-toride, is fully printed, the one on the left is only printed as a dotted line, which, considering that few people even bother to go to the Nishi-toride, is rather ominous and forboding, like we're not supposed to go here, or we don't know what we'll find. That is, of course, also rather exciting to a certain type -- a type like myself, and I'm sure like many of you.

The Higashi-toride (East Fort) of Shiodajō is a central node of the eastern branch of baileys radiating off from the Kōbōyama-toride. It forms an addended part of the Upper Castle as part of its east branch. This ridge is difficult to traverse, contains many sudden drops in elevation, has perilous drops to either side, and is perforated with huge boulders - in fact it is principally rock. I advise you do not come here unless you first have your affairs in order. The Higashi-toride is a relatively roomy section, and from below it looks like a large dome furry with trees. It has a contracted eastern spur where the earth has been worked into a sub-bailey.

Both north and south of Higashi-toride, above and below, small rocky peaks were fortified as part of the wider fortress of the Upper Castle. I descended from Higashi-toride to the final projecting bailey, which I found to be nothing more than a perch of rock. I had a break here and put up my feet, sitting idylically atop of a large pinnacle of rock which seemed to lift me above the heavens. From here the view was fabulous, and particularly I had an angelic view of the Zensanji temple complex with its pagoda of ponderous beauty. This rock has the best view, in my opinion, out of the many peaks I ascended that day. I named it Ranmaru Rock (蘭丸岩) in honour of the local castle maniac whose blog I was following, since he had also made it to this point before turning back, and I was relying on him as a guide. It is important, by the way, to turn back from here, as the mountainside is very steep and rocky below. The climb back up to the Kōbōyama-toride is sharp and intense. Ranmaru-sensei had apparently descended at some point between the Higashi-toride and Kōbōyama-toride back down into the main castle area in the valley, and he himself had come up initially via the Nishibōrui-gun, a grouping of fortified peaks along another ridge to the northwest. It was there that I would go next.

Retrieved from "http://jcastle.info/smw2021/index.php?title=Shiodajou_Higashi_Fort&oldid=53159"
Category:
This page was last edited on 1 June 2022, at 07:25.
Content is available under Creative Commons Attribution-NonCommercial-ShareAlike unless otherwise noted.
About Jcastle.info
Contact Jcastle.info