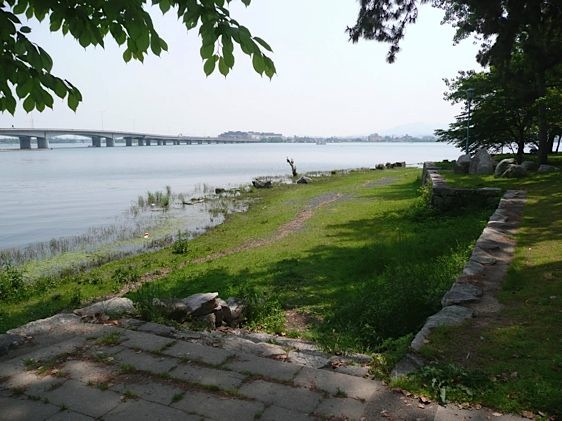 After the Battle of Sekigahara, Tokugawa Ieyasu ordered a new castle to be built in Zeze. This castle was designed by Todo Takatora. In its construction, some building materials were taken from the dismantled Otsu Castle. Zeze Castle had a four storey castle keep, a rarity in Japan as the number four is considered to be unlucky. The castle ruin site protrudes into Lake Biwa and is considered to be one of the top three lakeside castles (along with Takashima Castle in Nagano, and Matsue Castle in Shimane) in Japan. The Honmaru (Main Bailey) and Ninomaru (Second Bailey) of the castle were like islands floating in the lake, and it was also called Sekiroku (Stone Deer) Castle. In May 1662, this castle was badly damaged by an earthquake. The original castle keep was severely damaged, and some of the Honmaru and Ninomaru turrets including their bases collapsed and sunk into the lake. The Honmaru and Ninomaru were repaired, and the baileys were merged into one, the current site of Zeze Park.

The first lord of the castle was Toda Kazuaki in 1601 followed by Toda Ujikane, Honda Yasutoshi, Honda Toshitsugu, Suganuma Sadayoshi, Ishikawa Tadafusa, and Ishikawa Noriyuki. In 1651, Honda Toshitsugu took over again and until the Meiji Restoration in 1868, the Honda Clan ruled the castle. In 1870, the castle was demolished and many of its gates were sold to nearby shrines. Some of these original gates, which are listed as important national cultural assets, can be found at Shinozu Shrine (篠津神社), Wakamiya Hachiman Shrine (若宮八幡神社), and Zeze Shrine (膳所神社). The Shinozu Shrine’s current Otemon is the former North Otemon of Zeze Castle. Zeze Shrine has two of the Zeze Castle’s original Honmaru gates with the current Zeze Shrine’s Omote Gate being a former Zeze Castle Honmaru gate facing the Ninomaru. Wakamiya Hachiman Shrine’s main gate is the former Honmaru’s Inuhashi Gate. An original two-storey turret from the east side of the Honmaru can be found in Chausuyama Park (茶臼山公園). It has been converted into a small building used for meetings.

There isn’t a lot to see here now. Some stone walls still remains, but most of the baileys have been built over and form part of modern Zeze. The location is reasonably scenic on the lakeside, but is more of a park now rather than a castle ruin. The real attraction would be seeing the original gates at the different shrines and walking along the southern shore of Lake Biwa. To get around to the local shrines, I used my bicycle. Without a bicycle, it would be a nice long walk to get in all the original gates and the two-storey turret. Zeze Park is around 20 minutes on foot from JR Zeze Station. Zeze Shrine, with two of the original gates, is the closest shrine. It is 5 minutes away on foot. Without the original gates moved to nearby shrines, this castle site would only rate half a star for its minimal ruins but with the gates, it gets bumped up to a one-star rating for me.

ART, thanks for the info about one more of Zeze Castle's extant gates at Muchisaki Hachimangu(鞭崎神社). It's a well preserved Koraimon-style gate. This shrine is only a few hundred metres from Kusatsu General Hospital and around a 25-minute walk from Minami-Kusatsu Station. The shrine is located near the end of the former Yabase Road(矢橋道). If you walk a few hundred metres more along the former Yabase Road, a branch road from the Nakasendo, to the shore of Lake Biwa, you will come to the site of the former Yabase Port(矢橋港). There are two ishigaki jetties there as well as a sign about the history of this small port. For those who don't like walking, you can catch the bus going to the Aeon Mall from Minami-Kusatsu Station, getting off at the Kusatsu General Hospital.

Ron and I went back here and avenged ourselves on Zezejou by visiting all of the relocated structures. I'll add it here later but there's also the relocated Minami Ohtemon gate at Muchisaki Hachimanguu. The Yagura at Chausuyama is in a bad way. It has mutated shachihoko on it.

There is a whole cabal of imitation architecture surrounding this site. Unfortunately there are no exhibits at the castle shaped bunka center, just office space. I tried to see all the scattered about structures but i gave up and watched star wars instead.

I haven't been there but nearby there is also the Biwako Culture Center which is shaped like a castle. I don't think I'd come here otherwise but I think it'll be worth it now with the Bunkakan to help get my castle fix, but whilst I'm a fan of castle impersonation architecture, I know it makes others sad and angry, so it's not for everyone.

The local council workers have just cut the grass and cleared the weeds at Zeze Castle Ruin, so everything is tidier than in the photos shown. Also, I have been to this castle ruin a number of times, and the best time to go is during the cherry blossoms.

Retrieved from "http://jcastle.info/smw2021/index.php?title=Zeze_Castle&oldid=18717"
Category:
This page was last edited on 8 October 2017, at 12:05.
Content is available under Creative Commons Attribution-NonCommercial-ShareAlike unless otherwise noted.
About Jcastle.info
Contact Jcastle.info